Mount Elgon National park is situated close to Mbale in Eastern Uganda. It covers a total land expanse of 1145 sq km. the park was named after the most significant natural feature – Mount Elgon that stands at a height of 4321 meters; Mount Elgon is an extinct Volcanic Mountain found on Uganda’s border with Kenya. It is believed that millions of years ago, this mountain was higher than Mountain Kilimanjaro which is present day’s highest mountain in Africa. Although mountain Elgon is shared by the two neighboring countries (Uganda and Kenya), its highest peak the Wagagai peak found at 4321 meters is found on the Ugandan side of the mountain. There are three other outstanding peaks on this mountain: the Jackson’s summit at 4165 meter, Kiongo at 4303 meters and Mubiyi at 4210 meters. The local people living around this mountain locally refer to it as Mt. Masaba. The name Masaba was for the founding ancestor of the neighboring Bagisu people and he is believed to have come from one of the cave found on the slopes of this mountain a number of centuries ago. This mountain is a significant watershed for a number of rivers such as River Sipi that forms the renowned spectacular Sipi falls. The mountain slopes support a great array of altitudinal vegetation zones that range from the montane forest to the towering open moorland scattered with the huge groundsel plus lobelia. Although the beautiful scenery is the primary attraction, Mt. Elgon park has a diversity of animal species among which are buffaloes, tinny antelopes, forest monkeys and elephants of fauna species found in the park. The park as well is habitat to more than 299 bird species with a couple of them not being seen in any other part of the country. These birds include forest species and many endemic species specifically adapted to the montane moorlands of East Africa, among many others. 12 of the bird species found in Mt. Elgon have not been recorded in any other park in Uganda; among these are: Weyn’s weaver, Jackson’s francolin, Marsh Widowbird, Moorland Francolin, Alpine chat, Moustached green tinker bird, Hunter’s Cisticola, Red-throated wryneck as well as the black-collared apalis,. Some other tourist attractions within this park are the very old cave paintings near the trailhead found at Budadiri, stunning caves plus the hot springs inside the crater, in addition to the renowned Imbalu dances plus ceremonies conducted by the native people during their initiation ceremonies. How to reach Mount Elgon National Park The national Park can be reached by road and the drive takes about 3 to 4 hours from the capital city Kampala along a well tarmac road. Some of the Safari Activities to enjoy in the park The main tourist activity in the park is hiking. Mountaineering Mt. Elgon isn’t very difficult and the climate is not harsh so this activity is not only enjoyed by experienced climbers but by medium climbers as well. Enjoy Community visits and participate in their cultural ceremonies such as Imbalu dances. Enjoy nature walks starting from the Budadiri trailhead. Visits to the beautiful Sipi Falls to enjoy the breathtaking views of the surrounding scenery. Mount Elgon national park is found on the slopes of Mount Elgon in eastern Uganda. Mount Elgon, which the park is clearly named after is an extinct volcano and the fourth highest mountain in east Africa. The park is bisected by the Uganda-Kenya border. The Ugandan part of the park was gazetted in 1992, while the Kenyan part was gazetted much earlier in 1968. The entire park on either side of the border was declared a United Nations Educational, Scientific and Cultural [caption id="attachment_8104" align="alignright" width="242"] 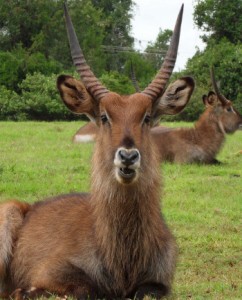 Waterbucks in Mt. Elgon NP[/caption] Organization (UNESCO). The park has a variety of wildlife, including birdlife, and o course volcano climbing opportunities. It is the perfect destination for an African safari. Wildlife in mt. Elgon national park Mt Elgon national park has quite the variety of wildlife within its boundaries. The varied vegetation cover along the mountain slopes are habitats to elephants, buffaloes, Oribi, Defassa’s waterbuck, duiker, squirrels, spotted hyenas, and a few primates such as the white colobus monkey and the blue monkey. The park is also home to about 300 species of birds, 40 of which are restricted range species. Some of the birds include; the Jackson francolin, black collared apalis, the moustached green tinker bird. These are some of the birds that are limited to the Ugandan highlands. Some of the birds limited to mount Elgon and just a few other mountains in the region. Hartlaub’s turaco, the bronze-naped pigeon, and Tucazze sunbird. Other birds found on either side include; Blackcap, Common WhitethroatCape Robin-Chat, Blue-shouldered Robin-Chat, Little Rock-Thrush, Northern Anteater Chat, , Mountain Yellow Warbler, Nightingale, Spotted Morning-Thrush, African Reed Warbler, Little Rush Warbler, Upcher’s Warbler, Common Chiffchaff, the Uganda and Brown Woodland Warblers, Green Hylia, White-browed Crombec, Yellow-bellied Hyliota, the Stout, Thrilling, and Rattling Cisticolas. Visiting Mount Elgon National Park. The best time to visit the park is in the dry season which happens between June and August and later from December to March. Although the park is open all year round for game viewing and mountain climbing. Mount Elgon is not as popular with mountain climbers as Kilimanjaro and Mont Kenya, but its numbers are ever increasing with the crowding on the higher mountains. What to do on a visit to Mt. Elgon National Park Mt. Elgon is one of the few national parks in Africa that offers more than game viewing and bird watching. Those can still be done in addition to the more adventurous mountain climbing, the visit to the magnificent Sipi falls, and the Chebonet falls, and walks along various trails such as the Sasa trail, the Sipi trail which takes you to the falls, the piswa trail and the saum trail. You can take a 3 day hike to Mount Elgon in Uganda. A Uganda safari will be much more exciting if Mt. Elgon National park is on your itinerary. Eastern Uganda has a lot of exciting activities and sights for a memorable Uganda safari. Two of these are Mount Elgon and the magnificent Sipi falls. You can have a rich and complete safari experience just visiting these two places. They have amazing scenic views, exciting activities such as hiking, biking, abseiling, nature walks, birding, hot springs, ancient rock painting, caves to explore and so much more. There are nice hotels and lodges to ease your stay in this area of Uganda. Mount Elgon national park and its surrounding areas are a perfect holiday and safari destination. A trip to Mount Elgon national park, with visits to Mount Elgon and Sipi falls is the perfect way to wind down from all the hustle and bustle of Kampala, and any other fast paced city. Because of the growing popularity of gorilla trekking, most people who visit Uganda head straight to western Uganda and that is where most safaris to Uganda are happening lately, but that means that many visitors to Uganda are missing out on the scenic beauty of mount elgon, mount elgon national park, and the magnificent roar of sipi falls. [caption id="attachment_8388" align="alignright" width="350"] 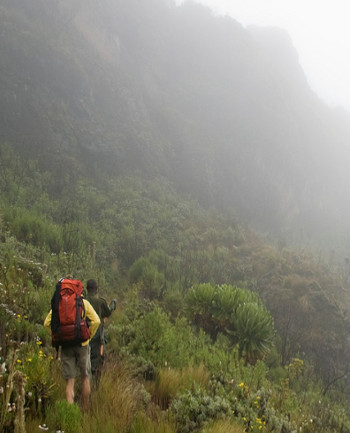 Mount Elgon was once the highest mountain in Africa, but volcanic activity reduced over the centuries to where it is now. It is no longer an active volcano and is the largest intact mountain caldera in the world. Many visitors interested in mountain climbing see Mount Elgon as an easier mountain to climb and it is. You do not need to be a skilled mountain climber to enjoy a mountain climbing experience on mt elgon. An average hiker or biker can enjoy this experience as well. There are qualified guides and porters to guide up and down the mountain, and to carry your heavy gear and lighten the climb.

What should you expect on a Climb up Mt Elgon?

Expect to see the gradual change of vegetation belts as you go higher. On the lower slopes you will find dense forest and due to the rainfall in the area the trees are often covered lichen, vine like lians and epiphytes while the forest floor seems to be carpeted with ferns and flowering plants such as wild orchids. The Bamboo forest region is next at about 2,000 plus meter elevation, beyond that is the open woodland, further on up you have giant heathers in meadows of grass and flowers, onward and upward to the Afro-Montane zone with its giant lobelias an groundsel. The climb is an exhilarating exercise and a good way to spend a few days of your safari. There is a lot of history and geography to be learnt as you climb and explore this great caldera. On the foothills of the mountain, you can hear the sounds of the sipi falls, which are also a must see on your visit to eastern Uganda.

What are some of the other things to do on a visit to Mount Elgon?

You can still enjoy your time around Mount Elgon without climbing the mountain. You can visit the park and see some wildlife, or go bird watching, go on nature walks, or explore the villages, caves and interact and learn about the Bamasaba people who live in the area. You can also go mountain biking. You can visit the forest exploration center and other trails on the foothills of the mountain. The forest exploration center is found near sipi town and used to be an educational center, but is now a trail-head for those who want to go mountain climbing. It however is still the perfect starting point if you want to explore caves, and see the various waterfalls, escarpments, and valleys. The avid birder can also have some fun. There are various bird species that you can spot in the area such as: Eastern Bronze-napped Pigeon, Hartlaub’s Turaco, Lemon Dove, African Hill Babbler, Alpine Chat, Dusky-Turtle Dove, Black-throated Wattle-eye, Thick-billed Honey guide, Mountain Yellow Warbler, Grey Cuckoo-Shrike. [caption id="attachment_8389" align="alignright" width="350"] 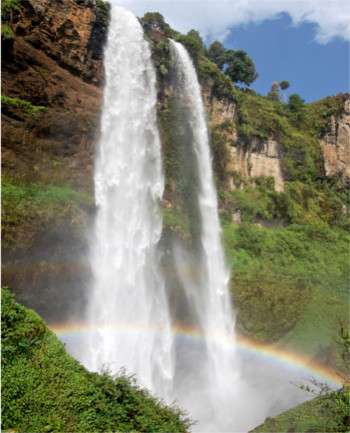 Sipi falls..[/caption] There are also various trails for those interested in nature walks. You can go on a half day nature walk with guides from the Uganda wildlife authority and see some interesting flora and fauna or visit Sipi falls.

Sipi falls is truly a gem in the East. The waterfalls are a sight to behold. They have such a scenic beauty and the roaring sound of waters falling down a steep rock makes it all simply magnificent!! A tour of the falls is well worth a trip to eastern Uganda. Exploring the caves behind the falls is very exciting and one of the trails can take you to the top where you will be able to see the water from above. The aerial view of the falls is breathtaking! We have a 4 day trekking or walking tour arranged for you. Mount Elgon and Sipi falls are two very good reasons to visit Eastern Uganda on you Uganda safari.]]>
MAKE AN INQUIRY