Mgahinga gorilla national park is the smallest wildlife park in Uganda. It is found in the south western corner of the country in the Virunga Mountains. It covers the northern slopes of three of three of the Virunga volcanoes namely; Mt Muhavura, Mt Sabinyo and Mt Gahinga. It is famous for the mountain gorillas that inhabit the area, but the beautiful scenery is part of what makes Mgahinga a popular Uganda tour spot.

The park has 9 habituated gorillas 2 silverbacks, 3 adult females, 2 juveniles and 2 infants which make gorilla trekking possible. This small park does not have as large a population of wildlife as the neighbouring Bwindi impenetrable park. It has about 39 species of mammals 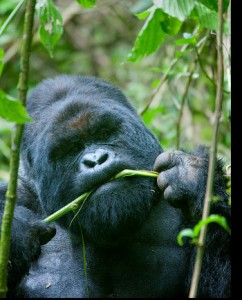 Gorillas are the most popular attraction in Mgahinga

Mgahinga has about 79 bird species including some that are endemic to the Eastern Congo montane.

Mgahinga is open and a good place to visit all year round, but the best time to visit is in the drier season. The drier months include December to January and June to August. Because the park is located in perhaps the coldest area in Uganda, what counts as the drier season, is not as hot as it would be in other parts of the country, but there is less rain during those months. The trails are usually slippery and harder to navigate during the wet season, but it is a good time for bird watching.

Bird watching can also be done throughout the year.

What to do in Mgahinga

Mgahinga Gorilla National Park is an interesting place to visit, you can of course go gorilla trekking, volcano hikes, because of it is located on the slopes of  3 extinct volcanoes Sabyinyo, Gahinga and Muhavura, and there are guided walks to the Garama cave. There is also bird watching; Sabinyo trail is very popular for birdwatcher. You can also go on a border trail, a 5 hour hike that covers about 10km and you do not need a visa to cross the border while on the hike.

This small park offers a unique experience of African wildlife. If you are planning  a Uganda safari trip, be sure to add Mhaginga to your itinerary.
Mgahinga Gorilla National Park is very popular gorillas tracking. In uganda its popularity is only exceeded by Bwindi Impenetrable National park. The park is open for gorilla tracking all year round although some seasons are a better time than others. The best time to visit for gorilla trekking and game viewing is during the drier season that runs from June – august, ans December – January.

Best time to visit: June to August, December to January

The drier seasons: June to August and December to January

This is the best time to visit the park. The trails are drier and easier to traverse, making gorilla tracking much easier. The days are usually sunny and the air sometimes gets hazy and wildlife and bird viewing can be clouded. June to September mark the peak season with a relatively more people visiting the park than any other time in the year. You need to book your gorilla tracking permit well ahead of time if you plan to visit during this time.

The wet seasons: February to May and September to November

Mgahinga generally good scenic views all year round, but during the wet season, the scenery is even more amazing, and everything is beautifully green. This season is the best season for bird watching because there are migratory birds in the park. You can also go gorilla 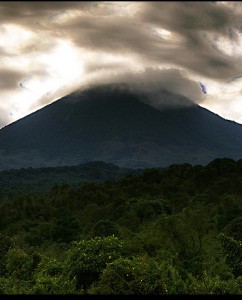 Apart from gorilla tracking, game viewing and bird watching, there is one other activity that is quite popular with tourists visiting Mgahinga Gorilla National Park and that is volcano climbing. The park is found on the slopes of three extinct volcanoes that make for a good climbing adventure. There is mount Sabyinyo, Mount Gahinga, and Mount Muhavura.

Mount Sabyinyo rises to about 3645meters above sea level and offers three peaks to climb and explore. If you climb all the way to the top of the third, you could literally be standing in three countries at the same time, Uganda, Rwanda, and Democratic republic of Congo. That is bound to be an amazing experience for anyone.

Mount Gahinga: this volcano rises to about 3474meters above sea level. A climb up Mt. Gahinga takes about six hours. Gahinga in the local language means small piles of stones. Although by no means a small pile of stones, Gahinga is quite small when compared to the vastness of Muhavura.

Mount Muhavura: rising to an impressive altitude of 4127meters, the muhavura is the highest of all three volcanoes and the most popular with climbers. A hike up this mount takes approximately 8 hours over a distance of about 12km.