There is a 6.5°C drop in temperature for every 1000m you climb. So the higher you go the colder it becomes. The park experiences two rainy seasons, the long rains and the short rains. The highest rainfall received in the area is 250mm in October, and the lowest is 10mm in July.

The short rains usually happen from March to May. These are usually accompanied by thunderstorms. It can rain for as little as 30 minutes and the shine the rest of the day.

The long rains fall from September to October and are also usually accompanied by thunderstorms. It often rains for long periods of time. 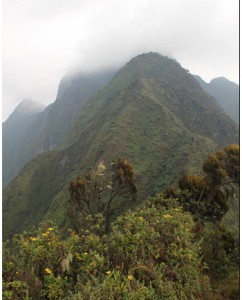 But when the rain stops, the scenery is very beautiful and the views can be really good. And the wet season is really good for bird watching.

The drier season runs from June to August and December and January. June, July and August are the driest months although there is always a possibility of rain. Average temperatures during this period are 20°C/68°F during the day and 8°C/46°F at night. This is the best time for tracking gorilla and game viewing.

December and January there is a bit more rain than in June to August but still much less than September to November. Day time temperatures hover around 21°C/68°F but vary according to altitude. This is still a good time to visit and track gorillas and view wildlife.

Mgahinga is generally cold but it is the perfect habitat for mountain gorillas.

The park covers an area of about 33 square kilometers which is only 8% of the entire Virunga conservation area. All the countries that have a portion of the Virunga Conservation area within their boundaries, i.e. Rwanda, D.R Congo and Uganda, protect their part of that conservation area. Uganda shelters Mgahinga and promotes it as a tourist destination. A visit to the small scenic park is definitely a worthwhile adventure.