Batwa People and their Culture

History of the Batwa

The Batwa also known as the Twa in Rwanda are an indigenous group of people who originally lived in the ancient Bwindi forest in Uganda until it was gazetted as a National park in 1991. The Batwa lived in harmony in the jungle with all creatures including the mountain gorillas. The Batwa were regarded as the Keepers of the forest.

Today they are some of the poorest people in the whole world with a low life expectancy and a high infant mortality rate. Some anthropologists say that most pygmy tribes such as the Batwa/the Twa have existed for more than 60,000 years in the equatorial forests. The Batwa lived a lifestyle of gathering fruit and plant, and hunting game in the forest using bows and arrows, this was mainly for both medical and food purposes. They led a harmonious life in the forests, they never practiced farming, no charcoal making or deforestation, not even the shelters they had could destroy the environment. 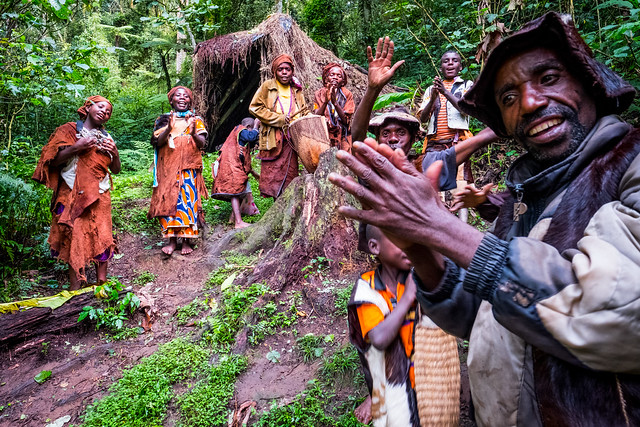 They have a saying “A Mutwa (singular) loves the forest just as he loves his body” Most Ugandans look at Batwa as Gorillas poachers, eaters and killers. But these people co-existed with the mighty giants and other creatures for very many years. The time the Batwa have hunted gorillas is after they had been evicted from their former home. Therefore because of this they are stigmatized with all the names they are called and also blamed for poaching Gorillas found in Mgahinga and Bwindi Impenetrable National Parks. But the reality is that the Batwa protected and kept the forest until the Bantu tribal groups migrated into the area.

The Bantu are the ones that grazed their cattle, cultivated and cut down the rainforests. Around 1992, after establishing the forest as a national Park with an aim of protecting the rare mountain gorillas, the Batwa were evicted from the forests, this changed their way of living forever because they became conservation refugees in a world they were totally not used to. Therefore their tools and skills were not useful in the modern environment they were living in hence began to suffer. Because they had no compensation in form of money or land. They could not compete in the modern marked place with their skills, hence some resorted to stealing, poaching, begging, and working for other people who even do not give them a fair wage for the work done. Basically in most parts of Uganda where Batwa people live they are seen as drunkards, lazy, pot smokers, and thieves.

Non-Batwa cannot marry Batwa women or men, they cannot even have meal with them, yet approximately 50% of Batwa women have been raped by non-Batwa men with a false belief that having sex with them would cure AIDS, home a number of non-pygmy children have been born into their community. The good news is that today, the Batwa have gotten a voice from different organizations which have spoken out for them and are making a difference for them. The Batwa still have hope of living again in the forests with various wildlife which is not possible because the forest can no longer contain Gorillas and people. However different agencies are doing their best to revive the original Batwa spirit of living in harmony. There are also programs that have been established for the Batwa such as a hospital, clinics, schools, home building, sanitation and water projects, promotion of indigenous rights and how to generate income.

Since the Batwa are not allowed to stay in the forests, the Batwa culture had started to diminish since 1992 after their eviction. Nevertheless things begun to change by 2011 where the Uganda Wildlife in conjunction with USAID (United States Agency for International Development plus the Embassy of Netherlands in Kampala started the Batwa Cultural Trail found in Mgahinga Gorilla Park. On this trail the tourists that visit the park and are interested in culture they are led by Batwa locals through the jungle, they basically teach the tourists their ancient gathering and hunting ways. After the visit Batwa Guides head back to their community, the Batwa also receive a percentage of the Batwa Trail Fees. Remember that tipping them is also accepted.

The Kellerman Foundation also set up the Batwa Experience just outside Bwindi Impenetrable National Park. Visitors can enjoy this experience after trekking gorillas. This Experience has greatly benefited the Batwa communities. Visitors are introduced to the Batwa culture including traditional dances, clothing, and food among other things.

Also in the south-end of Bwindi Forest, there is a Village visit program and the Buninga Batwa Forest Walk, this was started when the International Gorilla Conservation Programme(IGCP) worked hand in hand with the Batwa Community. His gives chance to tourists to explore the cultural and traditional ways of the Batwa. Buninga Forest is not part of Bwindi, but, its wildlife species, primates and the vegetation types are similar to those in Bwindi. Visitors can even spot some Chimpanzees during the forest walk. Note: It is very possible to enjoy Gorilla trekking and crown it with a visit in any of the Batwa communities or have a Village walk with Batwa guides. Basically the Batwa are an amazing indigenous group of people with excellent and interactive Cultural Experiences that one would not want to miss while visiting Uganda!