Kabwoya Wildlife Reserve can easily be called the hidden “gem” of the Albertine Rift valley in Uganda.

Kabwoya wildlife reserve is found in western Uganda, about 300km from Kampala. It is not as old as other protected areas in Uganda. It is the newest of them all and covers an area of about 87 sq. Miles of protected land. It was established as a reserve in 2002. It is part of the Albertine rift, an area which has various attractions extending from the Mgahinga National Park in the south to Murchison Falls in the north.

This small reserve is one of the most scenic wonders Uganda has. It occupies the scenic plains sandwiched between the Bunyoro escarpment 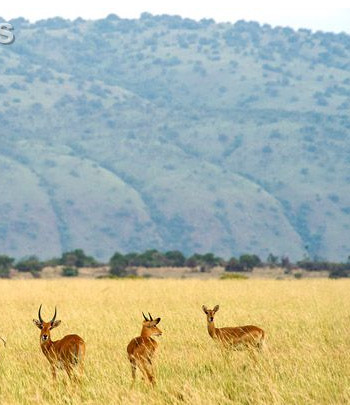 Kabwoya wildlife reserve is not a destination that many tour operators think about when planning safari trips for their clients, probably because it is quite new and not very well known. But tourists miss the opportunity to experience some really beautiful views of Lake Albert and the blue mountains of the DRC when they pass by this reserve. To crest the rift’s escarpment for the first time and find this little known plain spread out below is totally unexpected and breathe takingIts surroundings are the up-market Lake Albert Safari lodge which offers various services and activities for its guests, and a small fishing village along the shores of Lake Albert.

When it was still a Tonya Controlled hunting area, in the 1960s the area had a vast population of wildlife. But the animal population was wiped out by poachers and dispersed by local cattle herders.

The situation has however improved since the area was declared a wild life reserve. Uganda Wildlife Authority (UWA) has and is till bringing in more wildlife to the reserve. So far there are antelopes,impalsa,  bushbuck, Uganda kob, Duickers and hartebeests which used to be there in the 1960’s. There are also a few primates. Baboons found along the cliffs and chimpanzees, white and black colobus monkeys. These are found in the forests along Hoywa and wamababya rivers. So you can do a mini chimpanzee trekking expedition. You can also catch sight of some hippos in Lake Albert. The wildlife population in the reserve is slowly growing.

Kabwoya Wildlife Reserve’s biggest attraction is not so much the wildlife but the collective scenic wonder of everything found in this little piece of heaven. You can take guided walks; go on exciting game drives, horseback riding, bird watching, and fossil hunting.