Bwindi has a tropical climate. Average temperatures range from a minimum of 7-20°C to a maximum of 20-27°C. Bwindi receives up to 2390mm of rain each year. It can get really cold especially in the mornings and at night. Warm clothing is therefore a requirement when planning a gorilla trekking safari with Bwindi on your itinerary. The peak of the rainy season happens in March to April and from September to November. Altitude varies from 1160m to 2607m above sea level, which results in variations in temperature. The park is also close to the equator so rain can come when you least expect it. It however does not experience really dry seasons. The drier seasons; The months of June and July and December to February receive very low rainfall and are referred to as the drier season. This is the best time to visit the park for game viewing and gorilla trekking. It can get really hot during the day with temperatures of about 30°C, but the nights and mornings are usually very cold with temperatures dropping to as low as 9°C. The Wet seasons: Climate in Bwindi impenetrable national park is generally mild and wet but the months of March to May and September to November mark what could be cold the wet season. The rains are usually heavy during this time and it can sometimes drizzle for an entire day. The wet season is divided into two; the “short rains” March to May and the “heavy/long rains” September to November. There are migratory birds in the park during these months, which makes it a good time for bird watching. 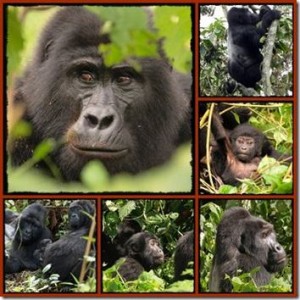 Although Gorilla trekking can be done all year round in the park, it can be challenging during these months because the trails are usually slippery and impassable. The Bwindi Impenetrable forest is one of the richest eco systems in Africa with a vast diversity of species. It has been around for over 25000 years and has accumulated a lengthy species list which includes 120 species of mammals including 10 primates such as the chimpanzee, L’Hoest’s, red-tailed and blue monkeys, black and white colobus, baboon and the famous mountain gorillas which u can track on a 3 day gorilla safari Uganda. The park boasts of 350 bird species, 310 species of butterflies, 51 reptiles and many endangered species. The park comprises of 327 sq km of jungle forests and contains montane and lowland forests accessible only by foot.  Bwindi is one of the most diverse forests in East Africa with more than 1000 flowering plant species of trees and 104 species of ferns.]]>