Tsavo east national park together with Tsavo west national park comprises one of the biggest wildlife sanctuaries not only in Africa but the world at large. The dominating feature in the eastern Tsavo is the Yatta plateau which is renowned for it huge expanse of flat thorn bush. The western side is known to be more spectacular with volcanic mountains, hills, and huge outcroppings offering magnificent views. The two parks cover a total area of 80,382 sq miles and are found at an altitudes range of the least being 230 meters and the highest is 2000 meters. The great difference in the altitude is among the several things that make this park very exceptional.

In the past there were a number of very renowned lion attacks in Tsavo that have made this area famous. It is believed that these lions in the area loved the taste of human flesh which they devoured on particularly during the slave trade era when bodies were abandoned in the forest and the legend says that they responsible for the wicked Tsavo man-eaters. Just as many of the African legends, this is more of an imaginary tale so you shouldn’t be worried about these lions as the area you will be visiting on your holiday is free of lions. Although if lucky you may have the opportunity to at least one of these animals. 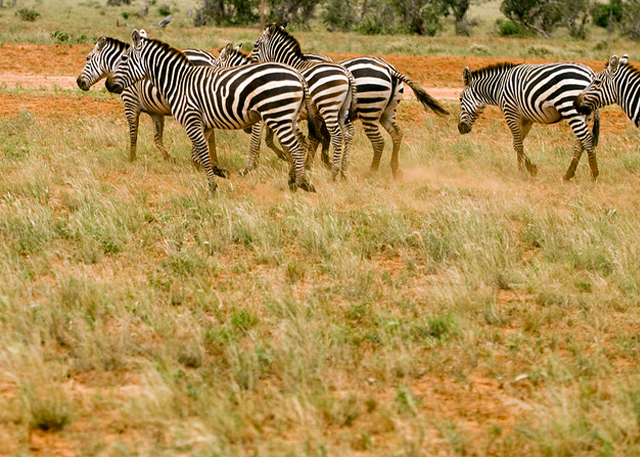 Tsavo East National Park is among of the very old national parks in the country and it covers a total land mass of 11747 sq km. the park was established in April 1948. It situated in Taita District in a tiny town known as Voi. It is neighbored by other major game reserves such as Mkomazi Game Reserve found in Tanzania as well as Chyulu Hills. There are a number of entrance gates found around the park such as the Sala Gate found in Malindi, Bachuma Gate found in Mombasa as well as Manyani Gate found in Voi.

Tsavo East National Park is separated into the eastern and western sections by a road plus a railway. The park was named after River Tsavo that flows through from the east to the west. This park offers some of the finest game vies across Africa and above all it home to Africa’s renowned big five mammals among which are the black rhinos, leopards, Cape buffaloes, elephants and Maasai Lion.

In addition there are numerous bird species living within the park among which are the lovebirds, black kite, sacred ibis plus the crowned crane. Generally the terrain of this park is flat and comprises of dry plains. Additional feature here worth mentioning include: the Lugard Falls plus the Yatta Plateau.

There are several other attraction in Tsavo East National Park such as the Mudanda Rock which is a 1.6 kilometer inselberg of stratified rock that serves as a water catchment area which supplies one of the dam in the park. Hundreds of large elephants plus various other wild animals gather her to drink water quench their thirst particularly in the dry season. This water point is known as the Aruba Dam and it was constructed in 1952 across River Voi. The Yatta plateau is the longest lava flow in the whole world and runs over the western boundary of this park. The plateau covers 290 kilometers and was formed by lava from the neighboring Ol Doinyo Sabuk Mountain.