ARCHEOLOGICAL SITES IN UGANDA
A number of archeological remains such as tools, trade goods have been discovered and preserved in Uganda, some date back to the early Stone Age time and some goods from the 19th century when the explorers and traders traded goods. 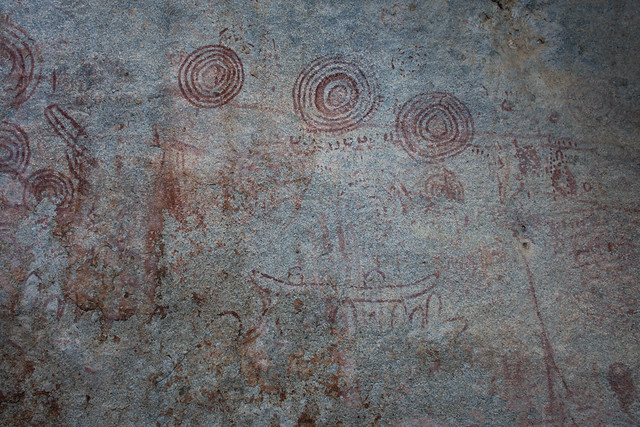 This is an extensive series of archeological earthworks covering about 10sqkm of the area and they are said to have been established between the 11th and 17th Centuries. The word Bigo bya mugenyi locally means “Fort of a Stranger”. There are a number of ditches that are about 5m deep and it is some of the works dug by the Bachwezi people, a duo-rule of Wamala and Ndahura.
This site is located on the southern bank of River Katonga about 60km from the Town of Ssembabule. Bigo is classified by two elements, the first one being the outer one consists of an irregular long ditch with a number of openings that creates an outer border connecting to Kakinga Swamp and River Katonga. The second one is the inner and consists an interconnected group of 4 ditches and bank enclosures that are joined to River Katonga by one ditch.
Tourists heading to Bigo pass through a place called Kabeho, it hosts ancient spears that were used at the camp by the guards before they continued to River Katonga. Around this place visitors fetch water to cleanse themselves before they proceed to Bigo. They do the cleansing because it is believed that by doing so the gods offer them protection.
After the cleansing, tourists proceed through the jungle to Bigo, there are a number of dangerous animals in the thicket such as snakes and leopards, but amazingly they have never caused any harm to anyone, and hence many people say it is proof that the gods offer protection. Bigo is also a place where locals come for traditional worship including asking for blessings and wealth from the gods.

Situated in Eastern Uganda approximately 8 km from Kumi Town in a small village known as Nyero. Nyero is comprised of 3 rock shelters that are located at walkable distance from each other.
The rock shelters have paintings which are some of the country’s oldest art. It is said that these paintings have existed ever since the Stone Age. These rocks were documented around 1913 among African destinations with this traditional illustration in red pigment. Some of the rock art represents animals, canoes, concentric circles and other art impressions.
It is believed that this rock art was done by the first settlers in this area, they were short people likened to the Batwa people, but currently the area is home to Itesots who have also lived here for several years. Regardless of the people that drew the art, the site is a very beautiful place to visit and also learn more about the history of this area. In fact for the tourists interested in Archeology and History the Nyero Rock Paintings are a great attraction.
Other places where to find similar rock paintings include; Loluli Island, Karamoja, Kaberamaido, Dolwe Ilsand in Lake Victoria, Palisa, Ngora, Obwin Rock, Kakoro and Nshenyi.

It is a famous Stone Age site located in the western part of Uganda in Isingiro district along River Kagera. It is the only country’s well-known site with extensive mircroliths from the Late Stone Age period. These include are man-made equipment used by the ancient African societies as weapons especially as arrow points and spearheads.
Nsongezi is indeed a great archeological site to visit that bears coatings of soot, this shows that the people lived there long ago used to cook food and roast meat. There is also an island near this site whose pottery also dates back to the Stone Age, it is a recognized cultural site.

The tree is situated on a hill in Mubende District about 2km from the town of Mubende. It is believed that this tree solves problems and gives out blessings. It is a 3 hours journey from Kampala to get to Mubende district plus about 15 minutes to ascend the Hill and there sits the Nakayima Tree.
Nakayima tree is estimated to have existed for over 650 years, it takes its name after a spirit and royal princess called Nakayima who was wife to Ndahura, the first king of the Kitara Empire. It is said she was a very beautiful spiritual princess that that used to roam among the hills and later disappeared into this tree.
The tree is one of the country’s oldest and strongest trees supported by strong root buttresses. Today the tree attracts a number of tourists and it is a very important part in the African traditions and spirituality. Apart from blessings obtained from this tree, locals also say it provides good health, wealth, and fertility in women.

It is situated along the shore of Lake Albert at the bottom of the Western Rift Valley. This is also known as a fishing village, because the locals practice fishing, they also produce and sell salt to earn a living. Kibiro is a mixed site that hosts both archeological and natural sites. This village can be accessed by road, approximately 1 hour drive from Hoima town.
Kibiro has hot springs whose water boils at 100°C, and most locals visit these springs for a number of reasons but mainly healing. Also since this water reaches the boiling point, tourists usually prove this by placing foods such as eggs and green bananas in the water and amazingly the foods get ready and can even be served. Also on the larger boulder, there is a grinding groove said to be the oldest above the hot springs.

This is a great archeological site located in Mityana district about 70km from Kampala City Centre. There are about 240 circular and deep holes which are related to Kintu traditions (the first muganda) in the Buganda mythology. The pits are also known as Walumbe’s pits, it is an active place of traditional worship for a traditional Baganda group known as Lubaale Cult with two shrines surrounded by a reed fence.
At this site are also old hammers, calabashes, arrows, spears, shields, cow skins and back cloth. The keepers of this place are also there to give your more information about this mysterious place.
Approximately 50m from Tanda is Nambi’s Rock, Nambi was the wife of Kintu and sister to Walumbe. It is said that Nmabi used to live at this rock, today a number of people visit this rock for tradioanl worsjip and to seek blessings from either Walumbe or Nambi.

It is situated in Kibale district 3km from Kakumiro trading center. This mysterious site takes the name from a legendary muchwezi called King Kateboha. The most important feature at this site is the deep hole through the rock, they say it is Katebeho’s beer pot. There is also a rock shelter called Bikegete with amazing earthworks.
The Munsa earthworks today is a shrine owned by a Bachwezi cult group, and several people visit this place for divine worship, healing and blessings. To the archeologists it is a great place for research since a number of small pieces of pots have been discovered in this place and it is said it was a great place for early pottery about a million years ago.
Other archeological sites found in the country include; Mparo Tombs, Ntusi Mounds, Nyakasura Cave, Ngarama Cave, Bweyorere Capital Site, Sempaya Hot springs, Jinja Kaloli Caves and many more.