The 3 days Safari will take you to Ugandas most visited National Park- Queen Elizabeth National Park one of; it covers an area 1,978 sq.km, found in the Western part of the country, approximately 376 km from Kampala. It is classified with various ecosystems such as the dazzling lakes, kazinga channel, extensive savannah, humid forests and also lush wetlands. 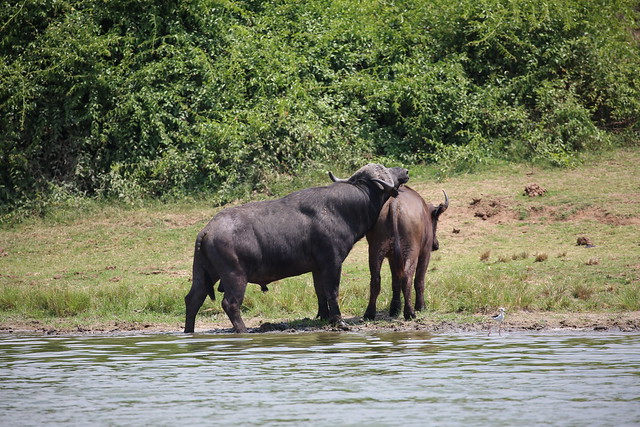 The park is home to about 100 mammal species, around 606 bird species: you will be in line to see big numbers of antelopes, crocodiles, hippos, elephants, buffaloes, among others during game drives through the park and on a boat cruise along the Kazinga channel which bisects the park. The park is also home to Climbing lions that are found in the Ishasha Sector, Chimpanzees in Kyambura Gorge and also various birds and monkeys in the Maramagambo forest.

Wake up early, enjoy a morning breakfast from the hotel after which you will be picked from there by your guide at 7:30 am who will brief you and you embark on the 6 hours journey to Queen Elizabeth. Along the way you will have few stopovers at the Equator, here you will take enough photographs and in Mbarara town at Agip Motel for your lunch.

Thereafter proceed to the Park as you drive through the spectacular landscape characterized with open grasslands, Ankole log horned cattle, tea plantations, the Rift valley Escarpment and various woodlands. Reach the park in late afternoon and have a game drive as you drive to your lodge. Have dinner and there spend an Overnight. 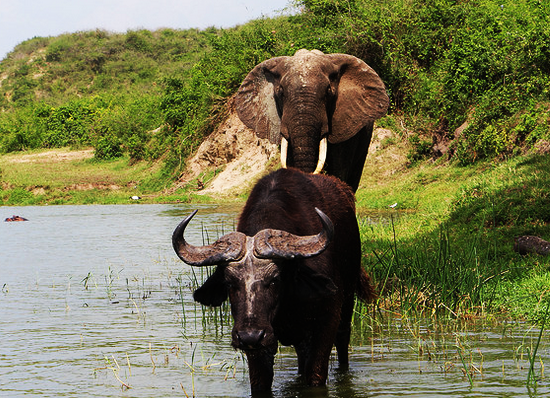 Begin your day with a delicious cup of coffee/tea before getting on with the game drive on different trails in the park including the along the Kasenyi trail.

Along the Kasenyi trail there is a great opportunity of seeing various animals like water bucks, Uganda Kobs, elephants, buffaloes, lions, warthogs as well as various birds. After the drive, go back and have breakfast and also lunch at your lodge.

Later during the afternoon, you will take pleasure in cruising on a 2 hours boat safari along Kazinga channel that connects Lake George and Lake Edward, while on the boat you will see a good number of animals like Hippos, crocodiles, buffaloes, warthogs, elephants, kobs among others and also a collection of birds like the malachite kingfishers, pink backed pelicans, on the banks and in trees. Have Dinner and Overnight.

With the superb memories of the past two days, you will enjoy a heavy and tasty breakfast. Then check out of the lodge, you could choose to have a primate walk in the Park or not. Enjoy your lunch still along the way, also have a stopover at Mpambire drum centre where you will see how drums are made by the locals and also be in position to buy some souvenirs, proceed to Kampala, where you will be dropped off at your hotel in the evening.

Queen Elizabeth National Park is one of the most popular game parks in Uganda and in east Africa.  It is located in the western part of Uganda about 376km from Kampala.  Queen Elizabeth national park is known for its variety of wildlife, most of which was killed in the Uganda-Tanzania war.  The park is a true nature hub with a number of natural attractions making it a suitable option for Uganda safaris.  It has volcanic features which include volcanic cones, and deep craters, it also includes the Maramagambo Forest, not to mention the various species of wildlife that reside within its borders.

Wildlife in Queen Elizabeth National Park
Queen Elizabeth National Park is famous for its tree climbing lions..
Queen Elizabeth national park is home to a number of mammals and birds. It is documented to have about 95 animal species and 612 bird species. The variety is well worth a visit to the park. Animal residents of the park include; the Uganda kob, warthog, elephant, waterbuck, giant forest hog, leopards, lions and hyenas. There are topi found in Ishasha, and primate in maramagambo forest and Kyambura Gorge. The park is famous for its tree climbing lions.
The  National Park’s 612 bird species include; the martial eagle, black-rumped buttonquail, African skimmer, Chapin’s flycatcher, pink backed pelicans, white-winged warbler, papyrus canary, papyrus gonolek and so many more. The park is every birdwatchers dream.

Game Viewing Time for Queen Elizabeth
The park is good for game viewing all year round. The dry seasons June-September and January to February is the best time to visit because the animals are near the water sources and much easier to see. The vegetation is also not as thick as it would be in the wet season. For those interested in tracking chimpanzees, this is the best time to visit.
You can also go wildlife viewing in the park during the rainy seasons of October to December and March to May. Although the tracks are slippery and quite difficult to navigate. And wildlife viewing might be interrupted by the rains.

What to do in Queen Elizabeth National Park
The park is full of interesting sites and activities. You can take guided walks to explore remote parts of the Mweya peninsula; you can go see the Kazinga channel, a 40km long stream that joins Lake George and Lake Edward.  There is a lot of wildlife that can be seen around the shoreline of the channel.  Other interesting features around the park include the Katwe explosion craters, the Queen’s pavilion, and the equator. In ishasha you can catch site of the tree climbing lions. You can also go on boat rides on the kazinga channel, go chimpanzee trekking in the Kyambura gorge, or simply enjoy the beautiful scenery.

Queen Elizabeth National park is arrived at from Kampala by air or by road. From Kampala, this park can be reached from the south through Mbarara – 420 kilometers or the north driving through Fort Portal – 410 kilometers. 3 airstrips serve this Park including Kasese, Ishasha plus Mweya airfield.
This 2,056 sq km park was set up in 1952 when the 2 game reserves of Lakes George and Edward were joined to form the Kazinga National Park. 2 years afterwards it was re-named Queen Elizabeth National Park after the Queen of England – Queen Elizabeth II visited Uganda.
It is among the Uganda’s oldest national parks and UNESCO listed it as a Biosphere Reserve for Humanity. Along with Kyambura plus Kigezi wildlife reserves, this park is among the most diversified eco-systems on the African continent.
Queen Elizabeth National Park is truly enticing and worth visiting with family or a special person to you, however go ready to like everything yet again as the park is gifted with breathtaking scenery plus attractions to complete an action packed holiday.
This park receives as much as 1250mm of rainfall mainly starting in March up to May and then from September up to November. The melting iced waters of Mountain Rwenzori form a large wetland system consisting of 2 primary lakes; Lake George and Lake Edward. Lake Edward was named by Henry Morton Stanley an early explorer after the Prince of Wales – King Edward VII.
These 2 lakes are linked by a 40 kilometers long water channel whose shores are inhabited by thousands of hippos as well as birds throughout the year.
The park is a haven for devoted ornithologists along with the beginner bird watchers. The list of birds includes 612 bird species such as the uncommon Shoe Bill, Martial Eagle, Eagle Owl, Papyrus Gonolek, Lesser & Greater Flamingoes, White tailed lark, Verraux’s Eagle Owl . There are more than 95 mammalian plus numerous species of butterflies.
Some of the Activities to enjoy include: a launch cruise on the Kazinga Channel offering you an opportunity to view wildlife. you will sail past large schools of hippos, and see various animals like the giant elephants just by the shore.
This launch cruise is considered to be the highlight tourist activity in the park and this is done in the morning and in the afternoon. Within the open savannah scattered with Acacia plus Euphorbia trees you will find lions, Uganda kobs, leopards plus buffaloes, in addition to topi, huge forest hogs and the water bucks.
connected by more than 200 km of properly kept tracks,  visitors get actually access the  game in the park by using a couple of the tracks go through areas such as the renowned  mating grounds for the Uganda kob.
The Kasenyi area on the eastern side of the Kasese road is renowned for lions that feed on large numbers of the Uganda kobs and yet the legendary tree climbing lions may be seen resting in the huge fig trees within the Ishasha areas just 100km south of the luxury Mweya Safari Lodge.
An additional crucial feature here is the Kyambura Gorge a steep gorge which resulted from turbulent waters of the thundering Kyambura River. It offers a green riverine forest home to the amazing chimpanzees, black & white Columbus monkeys, red tailed monkeys as well as olive baboons.
The park in addition has one of the largest areas of tropical forest in Uganda – the Maramagambo forest translated as “the forest beyond description”. There are also bat caves which are home to Pythons that prey on these bats; these pythons can easily be seen.
You will also see the stunning crater lakes dispersed throughout this park, the Katwe Explosion craters being the most notable.
This group of extinct volcanoes just north of the Mweya peninsula may be explored on the 27 km winding crater drive which offers amazing views of these craters