This 3 Day safari will take you to Uganda’s largest parks known as Murchison Falls National Park, situated in Northwestern Uganda on an area of 3,840 sq km, gazetted in 1926 as a game reserve.

It is classified with Savannah grasslands, and the Victoria Nile that flows through separating it into two (the northern and southern bank). Murchison Falls is home to over 451 bird species such as the Great blue Turaco, Goliath heron, the Shoebill, and the dwarf kingfisher among others, 76 mammal species, a big number of Nile crocodiles and above all the magnificent and thunderous Murchison Falls squeezing their way through a gorge that is 8m wide. All said, you will have an opportunity to enjoy both our Uganda safari game drives and the boat cruises along the Nile River. 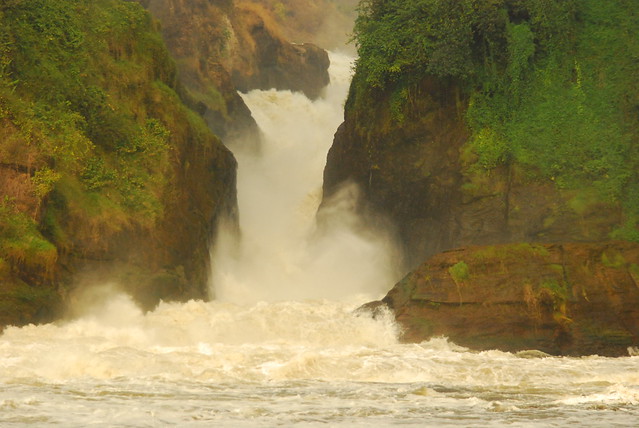 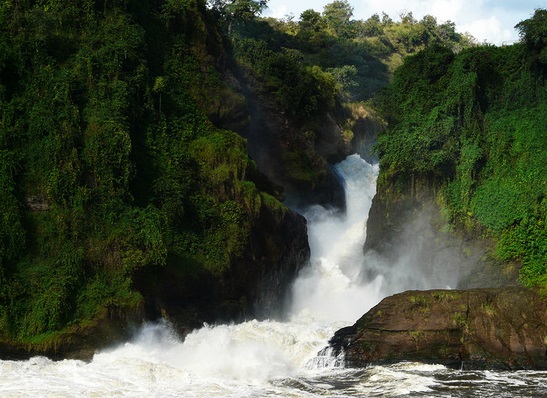 After an early breakfast, our driver guide will pick you up from your hotel at 7:00 am, he will also brief you about your 3 Days safari to Murchison falls and you will start your 6 hours journey to Murchison Falls National park. You will go through the Luwero, and later have a stopover at Ziwa Rhino Sanctuary for Rhino tracking; here you will find both black and white rhinos.

After tracking have another stop in Masindi where you will have lunch, after lunch proceed to the park, after making payments for park entry drive towards the top of the falls, here along the way you will see various animals such as warthogs, baboons among others.

Being at the top of the falls is an amazing experience as you will watch the magnificent falls squeezing through the rocks in an 8m gorge. Take as many photos as you can. Later drive to the lodge, relax the whole evening, have dinner and an overnight.

Day 2: Morning game drive and a boat cruise along the Nile 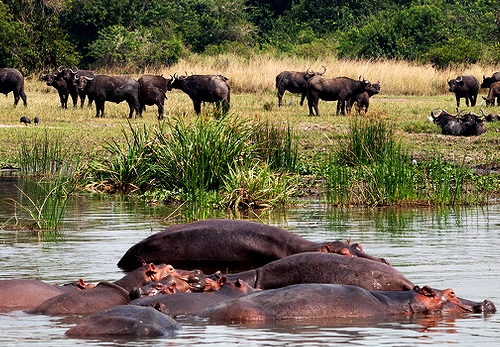 On this day wake up early and have breakfast at 6:30 am, after your driver and the ranger guide will pick you up from the lodge to start your Game drive at 7:00 am. During the drive you will be in position to see very many animals such as lions, buffaloes, giraffes, elephants, antelopes, water bucks and birds among others.

After the game drive at around 11:40 am, drive back to the lodge, relax/freshen up and have lunch as you prepare for the afternoon boat cruise. On the boat you will be able to see various Nile crocodiles, hippos, buffaloes, elephants along the banks of the Nile as well as different beautiful birds some singing in the trees such as the bee eaters, the colored kingfishers, the shoe billed stork and many others. The boat ride will take you to the base/bottom of the Murchison Falls, when you reach here you will be able to see clearly the mighty waterfalls.

You could opt to go for hiking to the top where you will meet your driver guide who will drive you back to the lodge. Have dinner and an Overnight.

Enjoy your breakfast; thereafter proceed for another Game drive in the morning on your way back to Kampala. It will be a great time as you look out for various animal species though most of them will be seen in the grasslands feeding such as buffaloes, elephants, giraffes, lions, antelopes, not forgetting a number of bird species.

Leave the park, have a stop in Masindi for lunch and continue with the journey reaching Kampala in the evening. Meal Plan; Breakfast and Lunch END OF SAFARI

Murchison Falls National Park is the biggest national park in the whole of Uganda. It extends over an expanse of 2840 sq km stretching over 2 districts of Amuru plus Masindi. How to get to Murchison Falls
This is a safari jewel in Uganda well known for its different game views as well as the stunning Murchison Falls from which the parks name was derived. The park is habitat to a diversity of Uganda safari wild animals such as the “big 5” that include leopards, buffaloes, elephants  plus lions. Previously this park also had rhinos however by 1983 they had out become extinct due to the out of control poaching plus guerrilla wars which rocked Uganda in the late 1970’s as well as the early 1980’s. Additional animals within the park are hippos, Oribis, giraffes, Hartebeest, crocodile, Uganda kob and antelopes. Primates like chimpanzees as well as monkeys are numerous within Rabongo Forest plus the Caniyo Pabidi forest. Bwindi National Park is home to a number of birds such as the uncommon shoebill, the yellow footed fly-catcher, white thighed hornbill, herons, ducks, fish eagles and kingfisher.

Murchison Falls National Park is cut across by the great River Nile running from the east to the west for 71 miles. The Nile divides Murchison falls park into the northern and southern areas. This separation played a big role in conserving the northern area from poachers. The river-crossing made it really challenging for poachers who were mainly coming from the south. Due to this the northern part is gifted with a lot more wild animals in comparison to the southern part which suffered severe poaching. Nonetheless, the Uganda Wildlife Authority (UWA) has since increased its efforts to safeguard this park from hunters as well as poachers.

Some of the Activities to enjoy in Murchison Falls National Park include:
Game drives mainly in the northern part of this park since it has more animals compared to the south. The game drives are done early in the morning starting at 6:00 am.
Boat cruise
This is the highlight of any safari in the Murchison Falls National Park. It is a wonderful cruise that takes about 3 hours. On this cruise you will see several hippos, waterbucks, Nile crocodiles and buffaloes in addition to numerous birds plus other characteristic African wildlife living in a savanna landscape. The boat ride takes you to the bottom of the Murchison Falls and the best time to enjoy it is in the afternoon when several animals congregate at the banks to cool off.
Top of the Falls Hike
You may opt to hike to the peak of a cliff near to the thin gorge through which the waters of the mighty Nile squeeze before thunderously dropping to over 40 meters below.
Chimpanzee tracking plus bird watching within Kaniyo Pabidi
Kaniyo Pabidi is a natural forest within the Budongo Forest Reserve and host to a diversity of wildlife among which are numerous chimps plus birds. It is a perfect alternative to the usual game drives plus boat rides. You may track chimpanzees or do some bird watching.
Sport Fishing
the huge Nile perch plus tiger fish offer an exciting yet challenging experience to the anglers, and this carried out just above and below the Murchison Falls.
Accommodation in Murchison Falls National Park
there is a wide range of accommodation facilities in and around the park including the budget, mid-range plus luxury facilities.
Murchison Falls National Park, sometimes referred to a Kabarega National park, is one of Uganda’s first and oldest national parks having been established in 1926. The park is found in North western Uganda between Lake Albert and the Victoria Nile and is part of the Murchison falls conservation Area.
This park is surrounded by a number of magnificent features such the Karuma falls, the Victoria Nile, Lake Albert and the powerful Murchison falls. It also has a variety of wild life including all of the “big five”, these are lion, leopard, elephant, rhino and buffalo.
Wildlife in Murchison Falls
Although it was greatly affected by hunting and poaching in the 1980s to the point that rhinos became extinct in the park, Murchison Falls National park has quite the variety of wildlife. It has about 76 different species of mammals including the “big five”. There are even some rhinos in the park today. Some of the animals found in the park include; elephants, leopards, lions, the kob, buffaloes, Oribi, waterbuck, Rothschild giraffe, olive baboons, black and white colobus monkey, mongoose , vervet monkey, and the chimpanzees. This makes chimpanzee trekking a popular activity in the park.
Murchison falls also has a variety of birdlife with 460 different bird species recorded. It is a good destination for bird watching as well as game viewing. You can catch sight of the African fish eagle, the very rare shoebill stork, the African skimmer, the grey-crowned crane, the goliath heron, Spotted and Verreaux’s owls , the silver bird and many more.
Game viewing in Murchison Falls National Park
Murchison Falls national park is Uganda’s largest national park. It has a variety of wildlife, birds and many adventurous activities. Game viewing is good all year round, even in the rainy season, it is possible to view wildlife. A 3 day safari to Murchison Falls National Park will be adequate.
However the very best time to go game viewing or tracking chimpanzees in Murchison falls is during the dry season. When it is easier to catch sight of the animals and the trails are dry and clear and easy to navigate. The best time for bird watching is during the rainy season when there is a lot of bird activity.
What to do in Murchison Falls And When To Visit
There is a host of things to see and activities to enjoy in this park. There are game drives, bird watching opportunities and boat rides along the river Nile. You can visit the Murchison falls, and Karuma falls and see the splendour first hand. Visitors can also enjoy camps and picnics in the park, go on guided nature walks in the Rabongo forest, or go on chimpanzee trekking expeditions. Remember the excellent weather at this park. Murchison Falls National Park gives any tourist on a Uganda safari the opportunity to enjoy Africa at its best.